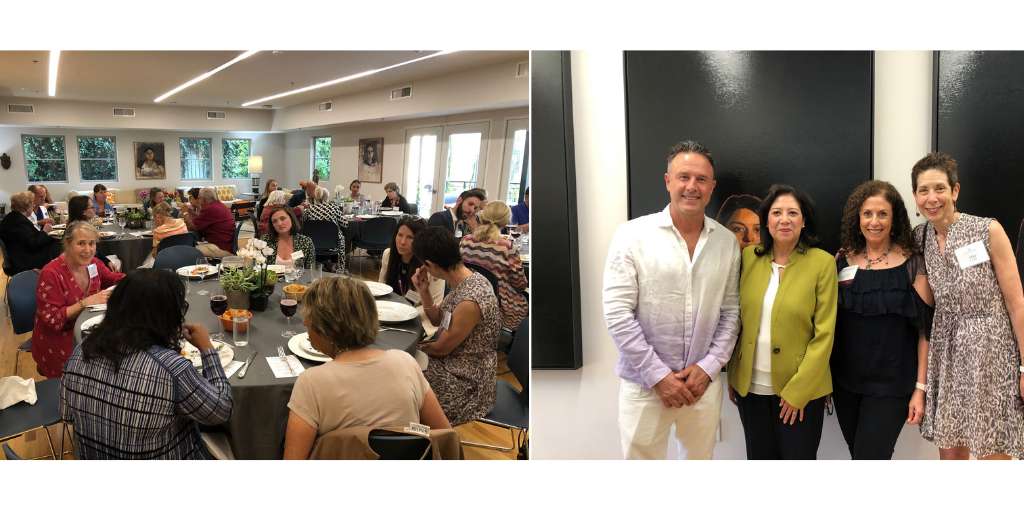 It’s not often that we get to visit and see firsthand the work of one of our LEF Award Winners.  Astrid was awarded the Meredith MacRae Empowerment Award in 2008.

As a Trusteeship member, Astrid really rolled out the red carpet for The Trusteeship by featuring chef prepared food from Top Restaurant, Babita Mexicuisine, for a sit down dinner with a Q & A and a discussion of the clinic and how it fits into the all the services for high risk patients at VIP and in Los Angeles County.

Famed actor, David Arquette, spoke about his sister Alexis and the Alexis Arquette Clinic leadership provided an overview of the clinic and the fabulous work they are doing with transgender youth.

Did you know 20% of youth in LA County Foster Care identify as LGBTQ? Did you know gay and lesbian youth are 4-times more likely to attempt suicide, with the rates much higher for bisexual and transgender youth. The new VIP Center provides comprehensive services.

The Alexis Project is an extension of VIP’s hallmark medical, mental health and support programs targeted at the LGBTQ+ population.

Here’s what Member Ruth Galanter has to say about Astrid’s work:  “If you’ve never seen this project, I urge you to make the trip. This is one of those “see a need, fill it” stories, and the impact on individuals and families has been pretty spectacular although the need still far outweighs the resources available. More and more research documents the ways having suffered violence and abuse as a child influences what happens to adults. For example, having suffered abuse as a child correlates highly with which veterans develop PTSD and which do not. I feel sure you will find discovering this program a reason to remain hopeful even as our culture seems to be deteriorating around us.”

Trusteeship member, Wendy Garen, President and CEO of The Ralph M. Parsons Foundation, shares: “Starting in 1984, Dr. Astrid Heger has built a cornerstone program serving victims of abuse and family violence. Based at LAC-USC medical center, her transformative work provides medical, mental and supportive service to more than 20,000 individuals annually, with a special focus on children in the foster care system. A tireless advocate, her leadership is helping to transform the child welfare system in Los Angeles. Since 1997, our foundation has invested more than $2 million in VIP, the nonprofit she founded.” 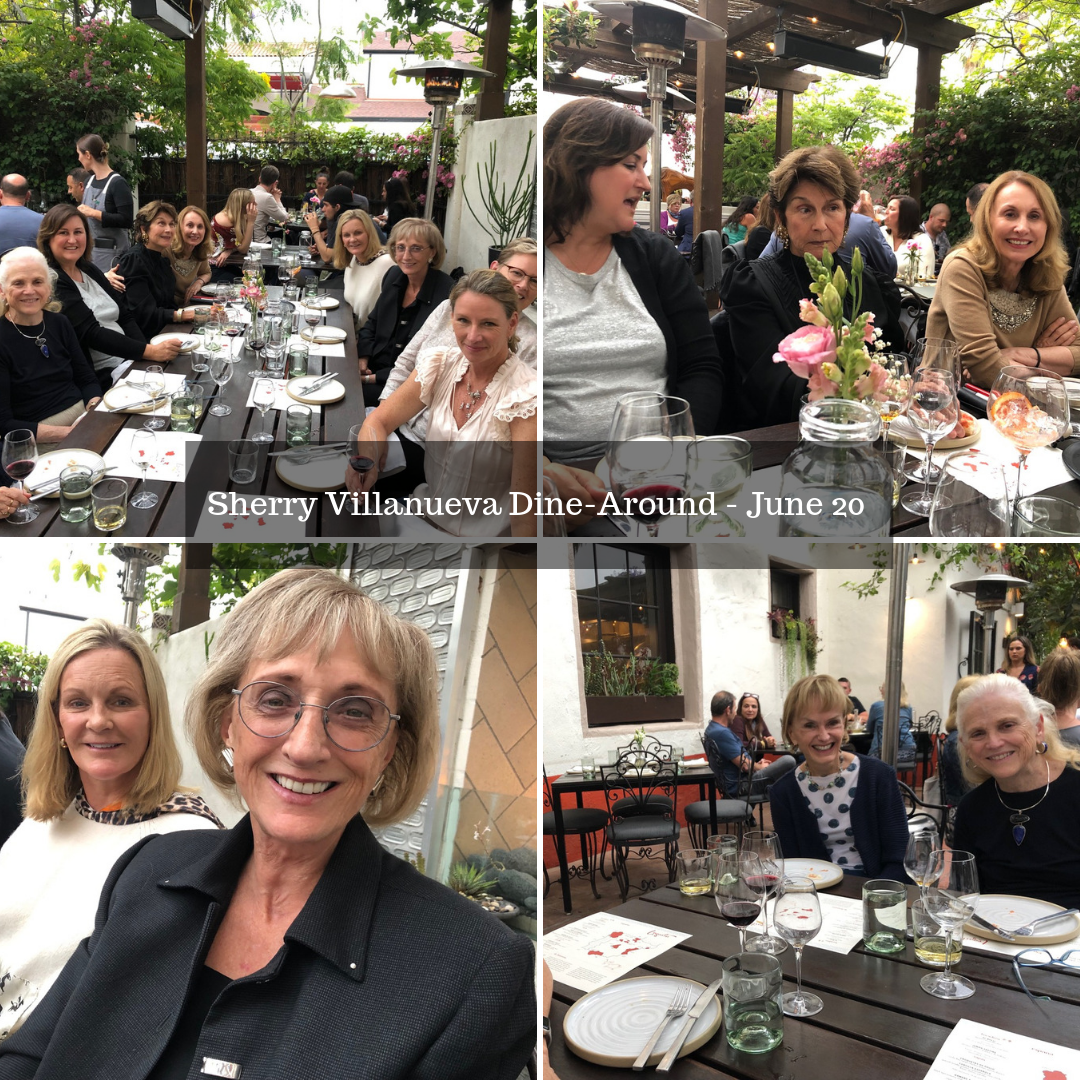 Sherry Villanueva, Managing Partner, Acme Hospitality, which owns and operates an innovative collection of boutique food and beverage concepts in the heart of Santa Barbara and Trusteeship member since 2016. Sherry is hosted a Dine-Around on Thursday, June 20th, 6:30 pm at her restaurant Loquita in Santa Barbara. In Sherry’s words: Our evening was a wine-paired dinner tour through Spain, guided by our Wine Director, David Medina. It was a fun and educational at the same time.

Mary Carrington, Pioneer computer intellectual property and global business transactions attorney and Trusteeship member since 1988, is hosted a Dine-Around on Thursday, June 13th at her home in beautiful Newport Coast.

What her guests had to say:

Mary’s glamorous house and casual-elegant cuisine provided the perfect setting for an evening that left me looking forward to getting to know all of you better. Thank you, Mary N.

I had such a great time with all of you. A beautiful and delicious dinner ( I was I heaven with all those salads!!). And the conversation was, as always, so interesting. Thank you for having us and planning a lovely evening, Mary.

Ditto that! Beautiful home, delicious food, and wonderful company. Thank you so much, Mary, for opening up your home to host us.

Great photo! Thank you for your fabulous hospitality. Jennifer K. 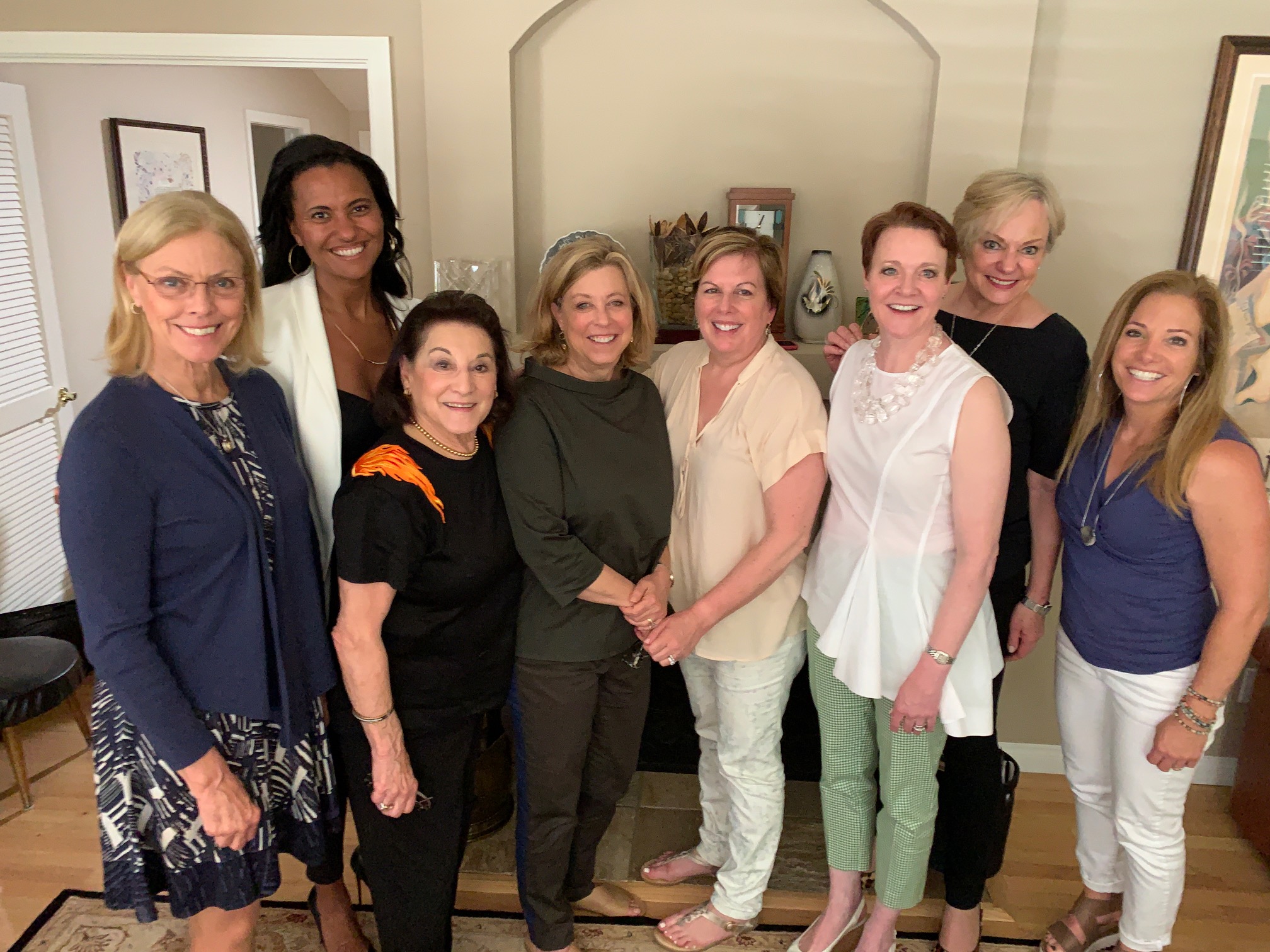 Ilyanne opened her home in Sherman Oaks to a lovely, daytime “Brunch-Around”. 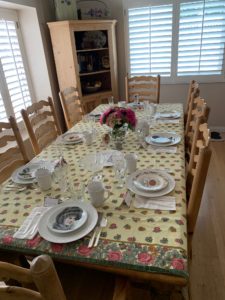 This is what her guests had to say:

Ilyanne- Thanks so much for a delicious meal and interesting conversation. It was very nice getting to know each of you better. Appreciate the pix as well! I will be sending you names of potential counsel in the next couple of days.  All the best, Dianne

Thank you, Ilyanne, for a delicious and insightful brunch!  Xo, Laura

Thank you for hosting us, Ilyanne and thank you all for the honest and helpful conversation! Jennifer

Hello everyone, It was such a pleasure to be with you all… and share Ilyanne’s wonderful brunch. What tales we could all tell to those working their way up the ladder…but….let them make their own stories!!! Let’s do it again soon….Ilse 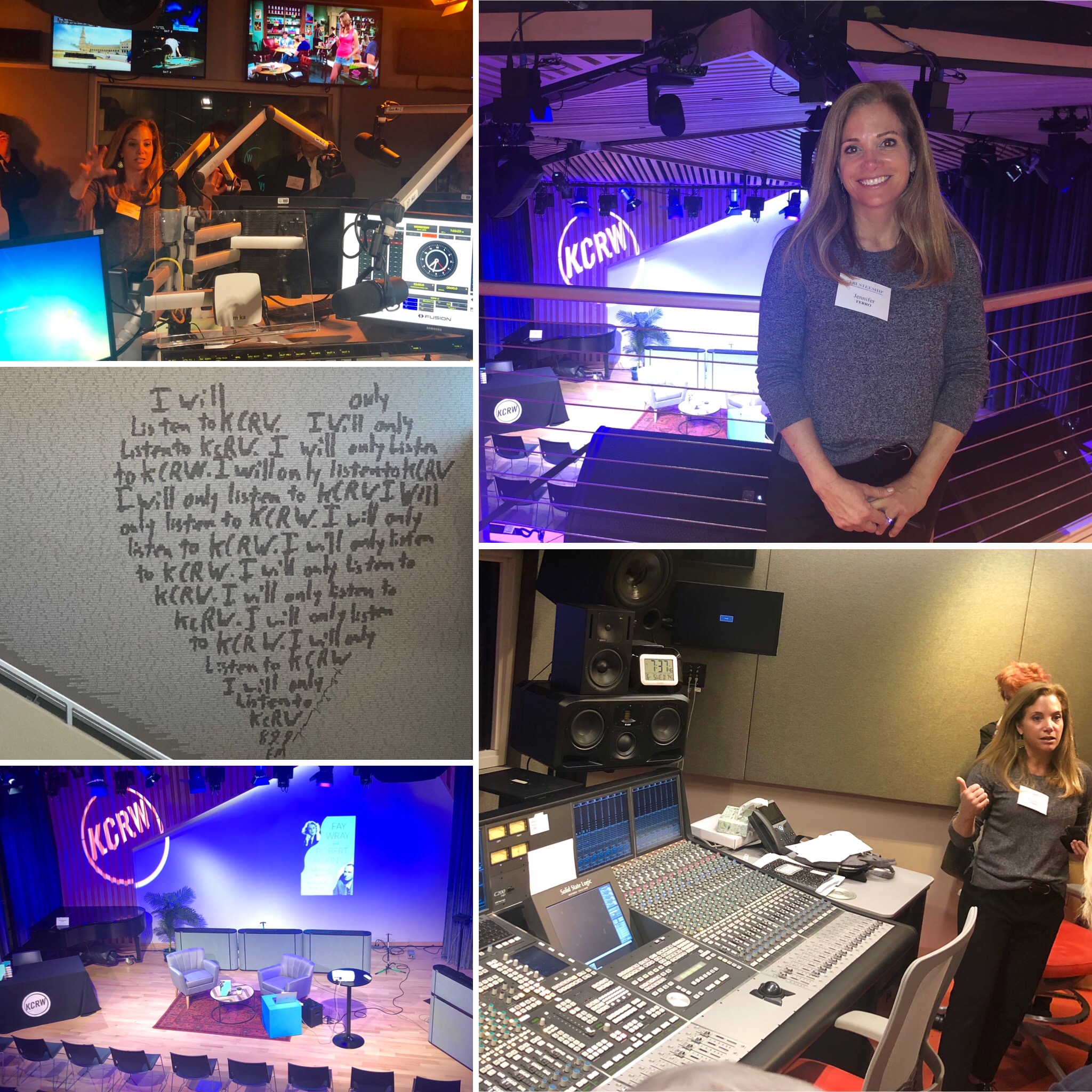 Behind the Scenes at KCRW & Interview with Vicki Riskin – June 5

The Trusteeship enjoyed a special Behind the Scenes Tour of the all new and recently opened KCRW Studios in Santa Monica, hosted by Trusteeship member, Jennifer Ferro, President of KCRW.

After the tour all enjoyed an interview with Trusteeship member and KCRW board member Vicki Riskin. Vicki is the Past President of the Writers Guild of America, and served for 12 years as a board member of the Human Rights Watch. She was interviewed by Jennifer regarding her recently published book about her parents, “Fay Wray and Robert Riskin: A Hollywood Memoir” and their amazing lives. 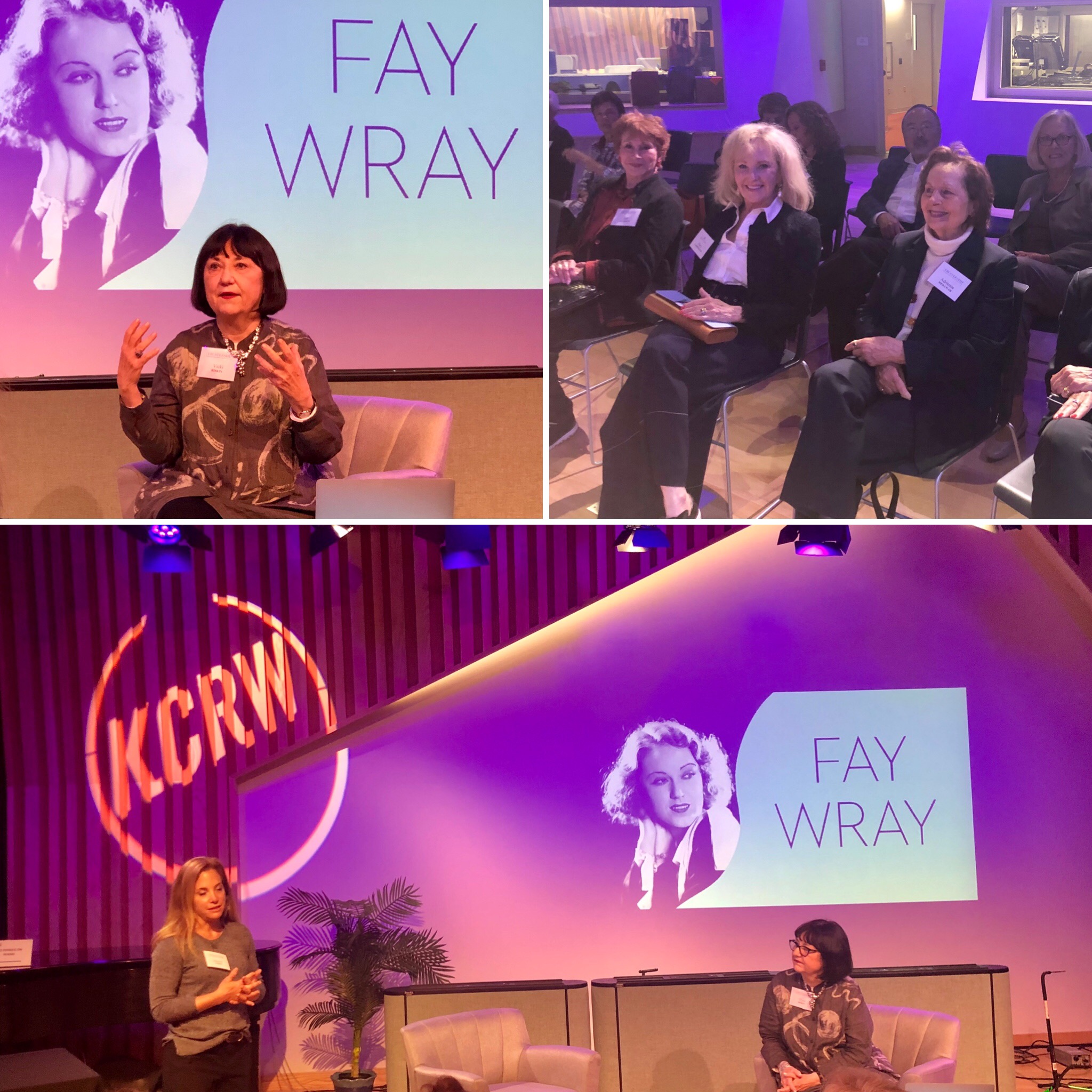 “We were so excited to host The Trusteeship and to be fully operational in our new, state of the art headquarters. Designed with collaboration in mind by noted workplace architect Clive Wilkinson, the award-winning KCRW Media Center is a new Los Angeles landmark. Conceived in 2008, the new building now serves as a destination for shared dialogue between KCRW and our audience, and operates as a multipurpose venue and broadcast studio for one of public media’s most innovative outlets. The new facility has dramatically increased our production capacity, with 26 studios for news, music, and culture. These new studios provide unprecedented opportunities to bring listeners into KCRW to experience live programming and observe in-studio performances and events.”

Fay Wray was most famous as the woman—the blonde in a diaphanous gown—who captured the heart of the mighty King Kong, the twenty-five-foot, sixty-ton gorilla, as he placed her, nestled in his eight-foot hand, on the ledge of the 102-story Empire State Building, putting Wray at the height of New York’s skyline and cinematic immortality.

The book’s—and Wray’s—counterpart: Robert Riskin, considered one of the greatest screenwriters of all time. Academy Award–winning writer (nominated for five), producer, ten-year-long collaborator with Frank Capra on such pictures as American Madness, It Happened One Night, Mr. Deeds Goes to Town, Lost Horizon, and Meet John Doe, hailed by many, among them F. Scott Fitzgerald, as “among the best screenwriters in the business. ” Riskin wrote women characters who were smart, ornery, sexy, always resilient, as he perfected what took full shape in It Happened One Night, the Riskin character, male or female—breezy, self-made, streetwise, optimistic, with a sense of humor that is subtle and sure.

Fay Wray and Robert Riskin lived large lives, finding each other after establishing their artistic selves and after each had had many romantic attachments—Wray, an eleven-year-long difficult marriage and a fraught affair with Clifford Odets, and Riskin, a series of romances with, among others, Carole Lombard, Glenda Farrell, and Loretta Young.

Here are Wray’s and Riskin’s lives, their work, their fairy-tale marriage that ended so tragically. Here are their dual, quintessential American lives, ultimately and blissfully intertwined.

“Imagine an enriching experience and rare opportunity to meet, learn from, and share time with a college president, a top TV or movie producer, an artist, an author, a politician, a business or philanthropic leader, to name a few. That’s the magic of The Trusteeship. Friendships and support when life has dealt you a setback are added — precious gifts.”