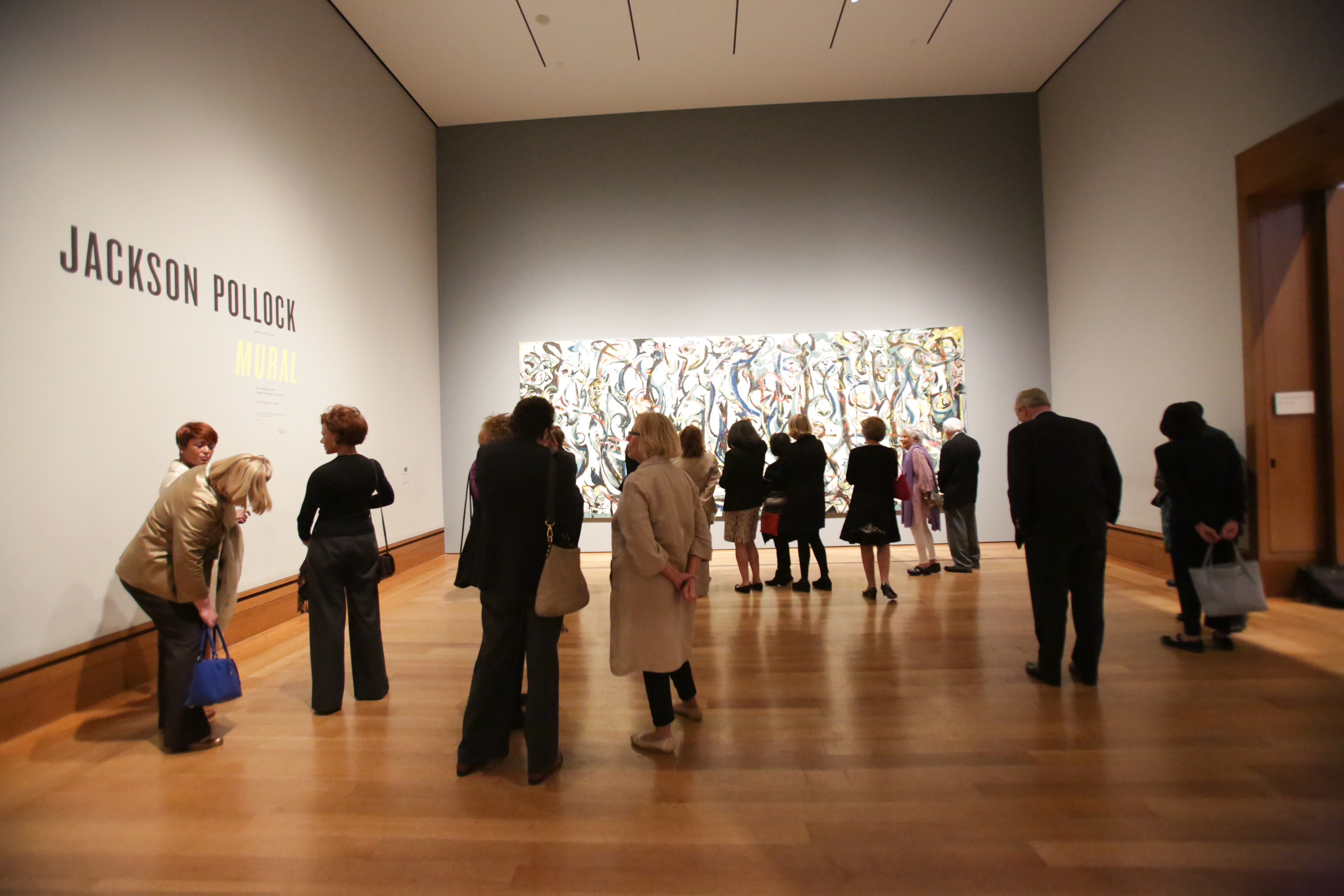 Jackson Pollock’s Mural, painted in 1943, is considered one of the iconic paintings of the twentieth century. Measuring 8 feet high and 20 feet long, the work represents a transitional moment in the artist’s career as he moved toward an experimental application of paint. On a beautiful May evening at the Getty Center, Trusteeship members and their guests had an opportunity to learn about the painting’s creation, history and recent restoration.

Introduced by Trusteeship member Thelma Melendez, a trustee of the J. Paul Getty Trust, Getty Senior Conservator Yvonne Szafran presented an educational, entertaining program about the famous painting that was commissioned by Peggy Guggenheim to fill the entry of her townhouse in New York City. “Almost immediately, myths arose around the painting,” said Yvonne. “There was a rumor that Pollock painted it in one evening in a drunken, almost psychotic frenzy. This is physically almost impossible, and documentation has proved that various parts of the canvas were painted at different times and with many types of paint. More likely it was painted over several weeks.”

Another story claims that Mural, which was painted on canvas rather than the wall for portability, was too large for the space in the Guggenheim entry and was cut by eight inches, but there is no evidence of this. However, the enormity of the canvas has presented challenges for decades: the canvas sagged under its weight and size; the center of the painting showed some warping and flaking; moving the painting became a carefully calculated engineering feat. It has been moved several times, from the Guggenheim home to display at MOMA and Yale and, in 1948, as a donation from Peggy Guggenheim to the University of Iowa where it arrived in 1957.

Yvonne, who calls her job “the best in the world,” worked with a team of three others (Tom Learner, Alan Phenix and Laura Rivers) on the restoration of the painting at the Getty. “The canvas was removed from the stretcher and carefully rolled for transport. Previous restoration work had resulted in a locking-in of the sag and also some cloudiness in parts of the painting,” she said. “Our goals for this conservation were to remove the Soluvan acrylic varnish that had caused cloudiness, to build a new stretcher and to tack the margins…an aesthetic issue that would enhance the painting.”

Videos showed the painting’s arrival at the Getty and subsequent cleaning to remove grime with tiny cotton swabs, then another cleaning to remove the varnish (also with swabs). During this meticulous work the team was able to see the many variables in the work more clearly: areas of matte and gloss paint; brush strokes mixed with spattering and dripping effects; single and multi-layered areas, etc.

Everyone in attendance was surprised and impressed by the combination of chemistry, art history and engineering required to complete this project. We took this newly acquired knowledge (basic though it was) and enjoyed a private viewing of this spectacular work of art, a veritable wealth of color, form and artistic expression. Pollock described it best when he said, “It’s a stampede… [of] every animal in the American West, cows and horses and antelopes and buffaloes. Everything is charging across that…surface.” We agreed; it is a stampede on the senses, an amazing, fast-moving journey through an artist’s creativity.

The tranquil beauty of the Getty Center in the evening, the company of friends, the opportunity to tap into knowledge of experts and to catch a glimpse into an artistic soul—all of these contributed to a memorable Trusteeship event.

“I am cloistered in my medical world. If not presented with a large, prospective, randomized study I question the evidence and relevance of many medical and societal conclusions. The Trusteeship is neither large nor randomized, but it is the most relevant, outstanding and compassionate group of women I have ever met.”