On Thursday, February 23rd, 25 Trusteeship members and their guests gathered at Maggiano’s at The Grove for a thoughtful panel let by our own Rabbi Laura Geller. The panel also consisted of Dr. Tammi Schneider, Professor of Religion at Claremont Graduate University and Dr. Ruquyya Kahn, Chair of Islamic Studies Associate Professor of Religion. 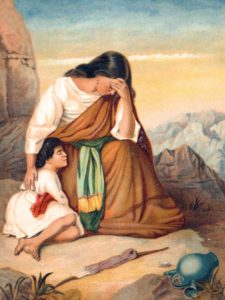 Dr. Schneider read text from the bible as follows:

21:1 And the Lord remembered Sarah as He had said, and the Lord did unto Sarah as He had spoken. 2 And Sarah conceived, and bore Abraham a son in his old age, at the set time of which God had spoken to him. 3 And Abraham called the name of his son that was born unto him, whom Sarah bore to him, Isaac.: 4 And Abraham circumcised his son Isaac when he was eight days old, as God had commanded him. 5 And Abraham was a hundred years old, when his son Isaac was born unto him. 6 And Sarah said: ‘God has made laughter for me; every one that hears will laugh on account of me.’ 7 And she said: ‘Who would have said unto Abraham, that Sarah should give children suck? for I have borne him a son in his old age.’ 8 And the child grew, and was weaned. And Abraham made a great feast on the day that Isaac was weaned. 9 And Sarah saw the son of Hagar the Egyptian, whom she had borne unto Abraham, making sport. 10 Wherefore she said unto Abraham: ‘Cast out this bondwoman and her son; for the son of this bondwoman shall not be heir with my son, even with Isaac.’ 11 And the thing was very grievous in Abraham’s sight on account of his son. 12 And God said unto Abraham: ‘Let it not be grievous in thy sight because of the lad, and because of thy bondwoman; in all that Sarah says to you, hearken unto her voice; for in Isaac shall seed be called to thee. 13 And also of the son of the bondwoman will I make a nation, because he is your seed.’ 14 And Abraham arose up early in the morning, and took bread and a bottle of water, and gave it unto Hagar, putting it on her shoulder, and the child, and sent her away; and she departed, and strayed in the wilderness of Beer-sheba. 15 And the water in the bottle was spent, and she cast the child under one of the shrubs. 16 And she went, and sat her down over against him a good way off, as it were a bow-shot; for she said: ‘Let me not look upon the death of the child.’ And she sat over against him, and lifted up her voice, and wept. 17 And God heard the voice of the lad; and the angel of God called to Hagar out of heaven, and said unto her: ‘What wrong, Hagar? fear not; for God has heard the voice of the lad where he is. 18 Arise, lift up the lad, and hold with your hand; for I will make him a great nation. 19 And God opened her eyes, and she saw a well of water; and she went, and filled the bottle with water, and gave the lad to drink. 20 And God was with the lad, and he grew; and he lived in the wilderness, and became an archer. 21 And he lived in the wilderness of Paran; and his mother took him a wife out of the land of Egypt.

We were asked to break up into groups of four and to consider which of the characters in the story do we identify with: Sarah, Hagar, Isaac, Ishmael, Abraham or God?  And, Why?

This led to some great dialogue and answers within the individual groups….where identity was formed and considered…very thought provoking and fun.

“I am cloistered in my medical world. If not presented with a large, prospective, randomized study I question the evidence and relevance of many medical and societal conclusions. The Trusteeship is neither large nor randomized, but it is the most relevant, outstanding and compassionate group of women I have ever met.”